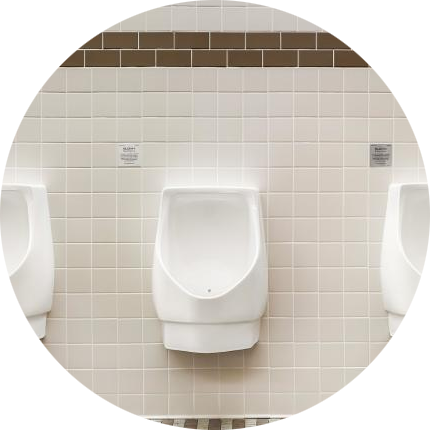 Are you one of the people that was hesitant to purchase or specify a waterfree urinal for fear of clogged drains and a smelly restroom? You probably looked into this technology either when they were first introduced over 10 years ago or at some time since, thinking it was just too good to be true. Zero water, no smell and nearly maintenance free. Well, the first two are correct but that last one is not completely true and this misconception has been the culprit in making waterfree a four-letter word with some people.

Back in the 2000's, when Falcon Waterfree Technologies and Sloan teamed up to offer some of the industry's first waterfree urinals, sales grew rapidly as customers took advantage of saving 1.5 to 3 gallons every time the urinals were used. As with any new technology, there was a learning curve for manufacturers, installers, maintenance personnel and even users. The concept was just hard to believe - how can a urinal have less bacteria and not smell without water flushing through the bowl? Over time however, these urinals became more prevalent and tenants and patrons became used to seeing these in restaurants, sports arenas, offices and many other commercial settings.

There was also the issue of clogs and smells. Although there were many successful installations, some waterfree customers still struggled with clogs and smells which placed the blame on the waterfree urinals. Some people even removed them and replaced them with their old flushing urinals.

Falcon and Sloan found that some customers had waterfree urinals that backed up or drained slowly even when the primary drain line was open and clear. If the cartridges were not full or clogged, what was causing this slow flow? Upon closer inspection, it turns out that the short, horizontal drain nipple was clogged by a substance known as struvite. Struvite is a water soluble, biosolid present in urine that slowly settles and accumulates in the waterfree cartridge. Once the cartridge is full, it simply needs to be replaced with a new one. However, it is very important to always clean the housing and drain nipple during these cartridge changes as well. A simple bucket of warm soapy water and/or using a bottle brush is all that is needed to remove the struvite before installing the new cartridge.

Awareness and education are the keys

In most commercial buildings, there is a disconnect between the equipment specifiers and purchasers and those who maintain them. Commercial restrooms are usually cleaned by a late night janitorial staff or by third-party contractors who might not know that the housing and nipple need to be cleaned when they change the cartridge to avoid clogged drain nipples and subsequent complaints. So, before you decide that your waterfree urinals don't work or decide to purchase a flushing urinal it would be worth your while to talk to your maintenance group first. Review the basics of waterfree urinal maintenance, stressing the importance of rinsing the drain nipple during changes. There's a good chance that you'll get that too-good-to-be-true performance you were hoping for and save thousands of gallons of water at the same time.

The magic of supplemental water flow

Keeping the drain nipple clean by pouring water is not a surprising concept. Independent studies have discovered that 'extra' drain water from sources such as faucets and showers - supplemental drain water - can drastically reduce build up in a drainpipe.

In 2015, after many patent filings and a co-collaboration, Sloan and Falcon harnessed this supplemental water concept by incorporating it into a new concept called the Hybrid Urinal with JetRinse® Solution Technology. The Hybrid Urinal automates the water rinsing described earlier so the maintenance staff doesn't have to remember to rinse at each cartridge change.

The best of both worlds

The Sloan Hybrid Urinal automatically injects a powerful stream of water into the cartridge housing against the spout, which redirects it down the drain nipple to prevent struvite from building up. The urinal is flushed with one gallon of water every 72 hours - regardless of how many people use the urinal. Because the urinal functions waterfree on a daily basis, the United States Green Building Council (USGBC) considers the Hybrid urinal to be equivalent to a waterfree urinal when calculating LEED or WELL points. These urinals address the difficulty of educating and communicating the need to perform a rinse with staff and contractors while still saving the maximum amount of water possible. Truly the best technology available on the market today.

So whether you are undergoing new construction or looking to upgrade your restroom, be sure to consider the many benefits of all of Sloan's world class fixtures - WaterFree, Hybrid and Flushing urinals.